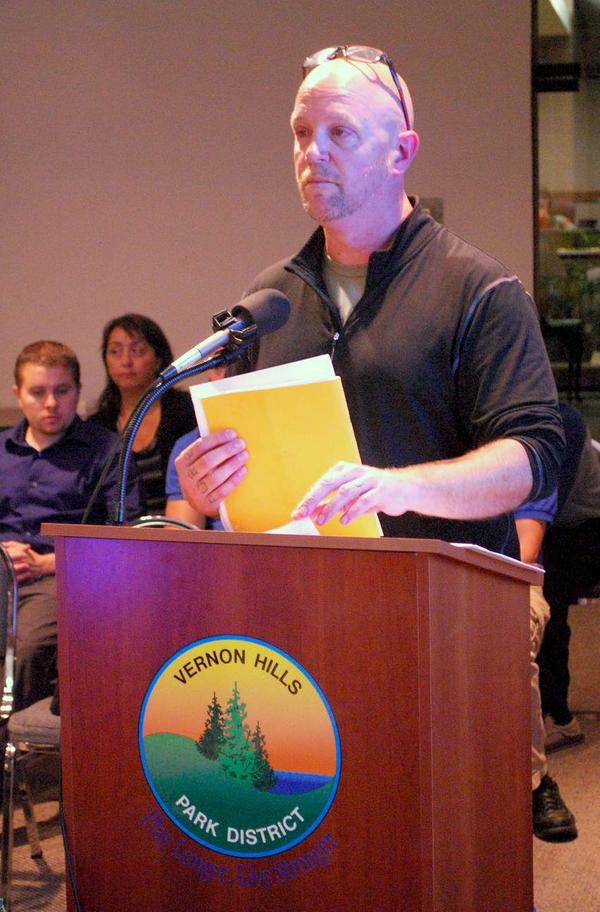 Another group of parents have approached the Vernon Hills Park District with complaints about the Cougars Youth Athletic Association.

Tim Nockels and a few others attended the Sept. 18 Park Board of Commissioners meeting with a petition asking for an in-house baseball league to be resurrected. The group says the Cougars program has decayed due to mismanagement.

The nonprofit became a legal affiliate of park programing in 2011, which essentially means the group coordinates certain sports and gets use of fields for reduced prices instead of having a Cougars league and park district league competing against each other.

Park officials, however, have no authority over the Cougars other than revoking use of fields.

A group of parents approached the Park Board of Commissioners in January asking to start a new baseball team for 12- and 13-year-old boys that would be separate from the Cougars. The parents said continued mismanagement led to most of the children withdrawing and going to the Buffalo Grove or Mundelein park districts.

At the time, park commissioners advised the parents to keep working with the Cougars because administrators cannot provide an equal rental rate and a new team would get all the leftover time slots.

Nockels, who was not part of that group, said on Sept. 18 that the traveling baseball teams seem to get most of the attention and resources compared to the in-house league that plays in Vernon Hills only and with local children.

“We don’t want to travel throughout Lake County,” Nockels said. “We want recreational leagues here at home where our kids can play with their friends. It also allows us parents to volunteer much more easily.”

Nockels also said that in recent years, instead of coaching his son’s team, he umpired due to scheduling issues with league officials. He said his happened close to 50 percent of the time and the constant problems led to more and more parents signing their kids up in other leagues.

“I won a contest through Major League Baseball and was allowed to donate $3,000 to a youth club,” Canalia said. “I chose the Cougars, but my kids don’t play travel ball so I asked for the money to go toward in-house baseball. They bought catchers gear for all in-house and travel teams. They could have bought more bats or something with the money the used for travel team catchers. I wanted my kids to benefit from my prize.”

Canalia said he thinks the Cougars organization neglects the in-house leagues but keeps them barely alive so the fees can supplement improvements to the travel program.

“Cutting through all the crap, you want the park district to take some of these leagues back, right?” asked Dave Doerhoefer, vice president of the Park Board. “Have you tried asking the Cougars to change?”

Canilia said he’s never heard back from Cougars leadership, and Nockels said the administrators he’s spoken with have been “nonresponsive.”

Bill Polisson, new president of the Cougars in-house baseball league, was in attendance for the meeting.

“I’ve only been president for one year so far and we had no problems with umpires or field scheduling last year,” Polisson said. “I can’t address what may have happened in the past, but I will say things are coordinated very well right now.”

Polisson did admit that registration for in-house teams is dropping, but he said the same is happening with other sports.

“We can’t make people sign up,” Polisson said. “Our problem with numbers is not unusual. Enrollment is dwindling everywhere.”

Park commissioners agreed to not get involved, but encouraged Polisson to keep improving some of the organizational problems.

“A lot of feedback has come our way saying there’s a major lack of communication,” Doerhoefer said. “It seems like you’ve already gotten started on that. Another thing that would clear things up would be a little more transparency when it comes to the money.”

Zhang Yuwei in New York (China Daily)-China is set to sign the tax-assistance convention with the Organization for Economic Cooperation and Development (OECD) on Tuesday and will become the last in the Group of 20 economies to enter the major global convention on tax.

On Tuesday, China’s tax head Wang Jun will sign the convention in Paris, which will be in force after three full calendar-months from its ratification. The convention — entitled Multilateral Convention on Mutual Administrative Assistance in Tax Matters – stipulates a structure for administrative collaboration between over 50 developing and developed nations in determining and collecting taxes, with emphasis on controlling tax evasion and avoidance.

China’s inclusion in the group ratifying the convention signifies the world’s second-largest economy participating “in international efforts to fight tax avoidance and evasion by coordinating with other countries in the assessment and collection of taxes”, according to OECD.

Upon the convention’s full enforcement with respect to China, the country’s tax officials will be allowed to request their counterparts from the participating nations for use of their tax records and vice versa.

Steven Zhang, managing director at Fund Tax Services LLC in New York, said China’s entrance to the group is “in keeping with a worldwide pattern”.

“China’s concurrence with the objectives of the convention would enhance the efficiency of Chinese tax officials in quelling potential tax avoidance and evasion by foreigners and foreign enterprises,” said Zhang.

Tax evasion was also a main concern set by world leaders, together with the leaders from the G20 economies, to tackle the causes of the 2008 financial catastrophe and to help eradicate corruption – one of the primary issues China’s new government has resolved to tackle with determination.

Tax evasion and avoidance will be one of the chief matters under consideration at the G20 summit in St. Petersburg on Sept 5-6.

“Governments all over the world are implementing laws and policies to enforce taxpayers to show greater transparency in their tax reporting and are increasing coordination in fighting tax avoidance over various jurisdictions,” said Zhang.

“Escalating pressure from nations and enforcers has put administration of international tax risk at the frontline of company and financial decisions,” he added.

Global Financial Integrity, a non-profit advocacy and research group based in Washington, said the Chinese economy bled $3.79 trillion in illegal investment outflows from 2000 through 2011. Out of about $2.83 trillion that drained unlawfully out of China from 2005 to 2011, they said, $595.8 billion ended up as bank deposits or financial assets – such as bonds, stocks, derivatives, and mutual funds -in tax shelters.

Statistics provided by China’s State Administration of Taxation last month revealed that anti-tax evasion moves by the Chinese government produced an additional income of about $5.7 billion last year, almost 30 times the figure of 2008.

The convention was developed jointly by the OECD and the Council of Europe in 1988. In 2009, the accord was rationalized to make it conform with international requirements on the transfer of information for tax purposes, and to allow nations that were not part of the OECD or the Council of Europe to join in.

Over 50 nations have either entered as signatories or have expressed their desire to do so since the revision of the convention.

Baseball has been in the headlines lately, and for the ugliest of reasons: cheating.

Not the old hide-the-ball-in-the-glove trick or greasing or scuffing the baseball. No, those would be too obvious.

In their pursuit of perfection, or at least superior performance, dozens of high-paid athletes, superstars and utility players turned to performance-enhancing drugs that they hoped would evade discovery. It didn't work, and America's pastime is plagued with scandal.

The sad thing is that cheating is not that uncommon. We see it on Wall Street, in politics, in famous marriages and just about everywhere you look. It seems it's become part of our culture. Is the spirit of competition that drives American progress creating a nation of cheaters?

People cheat on diets, at cards or on fitness programs. Bolder folks might cheat on taxes, resumes or dating profiles. But where do we draw the line in the sand? Is some cheating OK?

We need to examine that attitude. I still believe that trust is one of the most important attributes of any truly successful person.

In a Conference Board poll of 15,000 juniors and seniors at 31 universities, more than 87 percent of business majors admitted to cheating at least once in college, the largest such percentage. Engineering students came in second at 74 percent. Next came science students and Humanities majors, tied at 63 percent.

According to USA Today, college students on 27 campuses in 19 states were asked what they would do if they caught a classmate cheating. Would they report it? 81 percent said, "No." Are you as surprised as I am that there are more than 150 websites that offer essays, term papers and dissertations for sale?

Does that set the stage for life? Well, I surely hope not. But reading the headlines might make you think otherwise.

Political sex scandals are hard to ignore these days. Certainly not all politicians are cheaters, but when the news is dominated day after day by some outrageous behavior that most of us would never condone, it casts a long shadow. After all, if they'll cheat on the ones they love, what will they do to get votes or push legislation through?

When trust is eroded, an entire group suffers, even those who are squeaky clean.

In a survey of students at the nation's top business schools, two-thirds of women and more than half the men said they do not believe that most companies are "run honestly or ethically."

In a speech, former Bank of America global risk executive Amy Woods Brinkley spoke about what the research firm Inferential Focus called the "gaming" of everything in our lives. "What they mean in short is that our passion in America for games -- for entertainment and competition -- seems to be exceeding its normal bounds. As a result, the lines between recreation and reality have grown blurry. More and more aspects of our society appear to be treated like a game to be won ... rather than a real life to be lived."

A baker bought his butter from a local farmer. After some time, the baker began to suspect that he wasn't receiving full pound bricks of butter from the farmer.

For several days, he weighed the butter after it was delivered. His suspicions proved correct. So he turned to the law to settle the matter.

The farmer was brought to court to answer for his act of fraud. "What kind of scale do you use?" the judge asked.

"I don't have a scale, your honor," replied the farmer.

"Then how can you weigh the butter that you sell?"

"It's pretty simple," the farmer said. "I have balances, and I use the one-pound loaf of bread I buy from the baker as a weight."

I learned a long time ago that by not cheating -- and doing the right thing -- you will live a much happier life than you will by trying to cheat your way through it. Just tell the truth. It's so simple, so basic -- and the cover-up is always worse. You'll also sleep much better at night.

Mackay's Moral: Sophocles said it best, "I would prefer even to fail with honor than to win by cheating."

• Harvey Mackay is the author of the New York Times best-seller "Swim With the Sharks Without Being Eaten Alive." He can be reached through his website, www.harveymackay.com.